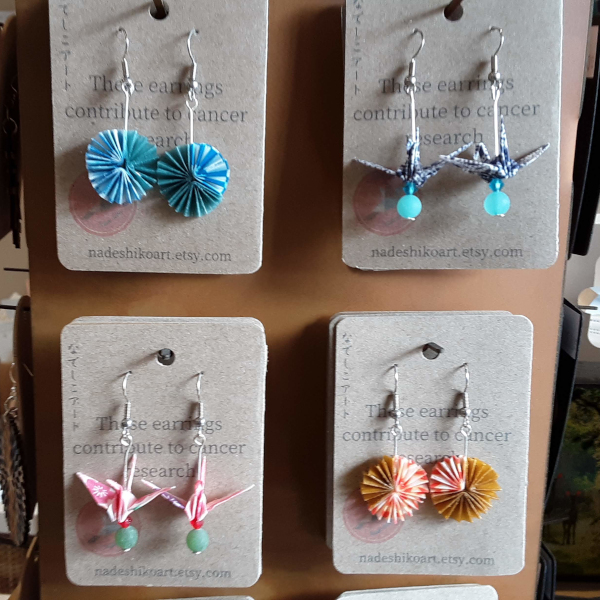 When one of our friends discovered these earrings on Etsy, AND, learned about the story behind them, he immediately reached out to us. Amane Shiohara works in biotech in Australia for a living and creates beautiful art to raise money for cancer research as a passion. Each pair of earrings is handmade origami with hypoallergenic surgical steel loops. We have cranes, leaves, butterflies, and circles in a wide variety of colors and a portion of every sale goes to support cancer research in Australia and Japan.

Inspired by the story of Sadako Sasaki’s 1,000 Cranes, Amane began folding origami during her own struggles with cancer.

Sadako and the Thousand Paper Cranes is based on the true story of a girl named Sadako Sasaki. It begins nine years after the United States dropped an atom bomb on the city of Hiroshima, Japan in an attempt to end World War II. When the bomb fell, Sadako was only two years old, and she survived the explosion with seemingly no injuries. However, when Sadako was 11 years old, she discovered that she had leukemia, a form of cancer many people called the ‘atom bomb disease’. The leukemia was a result of radiation poisoning from the bomb.

While Sadako was in the hospital, her best friend Chizuko told her that if she folded one thousand paper cranes, the gods would heal her. Sadako continued to grow weaker and sicker, but she never gave up hope. In the book, the young girl only managed to fold 644 of the beautiful paper birds before she took her last breath. After her death, Sadako’s classmates folded the rest of the one thousand paper cranes, and they were buried with her.

Sadako’s story is one that inspires peace and hope all over the world, and there is a monument in the Hiroshima Peace Memorial Park in memory of Sadako that helps spread her story.

Those of you who know Reach And Teach well know that origami butterflies have played a huge role in our shop since we started it and recently we were treated to the gift of having cranes folded in our shop taken to Hiroshima for a peace gathering and then having cranes folded in Hiroshima brought back to us to share with our partners in peacemaking.

We are honored to bring peacemaking full circle by offering these beautiful earrings from Amane Shiohara to you! They are available in the store in a variety of styles and colors. If you can’t get to the store, send us a note and we’ll happily zoom with you to show you the selection.

DEFY Censorship and Read Banned Books!
2022-09-19
September 18-24 is Banned Books Week and Reach And Teach has lots of ideas and news to kick that week...

San Mateo Bookstore Debuts a Pay and Play Maker Space
2022-08-04
Reach and Teach - Books, Toys, and Gifts in San Mateo has always been a hands-on play space for its...